336 of Frontiers in Artificial Intelligence and Applications 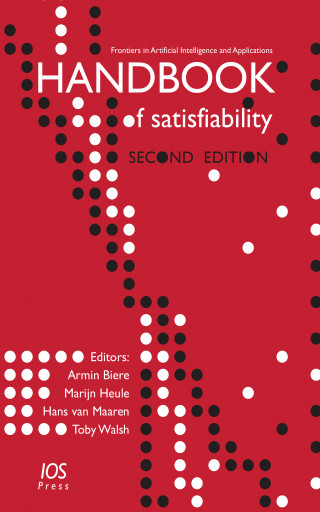 Propositional logic has been recognized throughout the centuries as one of the cornerstones of reasoning in philosophy and mathematics. Over time, its formalization into Boolean algebra was accompanied by the recognition that a wide range of combinatorial problems can be expressed as propositional satisfiability (SAT) problems. Because of this dual role, SAT developed into a mature, multi-faceted scientific discipline, and from the earliest days of computing a search was underway to discover how to solve SAT problems in an automated fashion.

This book, the Handbook of Satisfiability, is the second, updated and revised edition of the book first published in 2009 under the same name. The handbook aims to capture the full breadth and depth of SAT and to bring together significant progress and advances in automated solving. Topics covered span practical and theoretical research on SAT and its applications and include search algorithms, heuristics, analysis of algorithms, hard instances, randomized formulae, problem encodings, industrial applications, solvers, simplifiers, tools, case studies and empirical results. SAT is interpreted in a broad sense, so as well as propositional satisfiability, there are chapters covering the domain of quantified Boolean formulae (QBF), constraints programming techniques (CSP) for word-level problems and their propositional encoding, and satisfiability modulo theories (SMT). An extensive bibliography completes each chapter.

This second edition of the handbook will be of interest to researchers, graduate students, final-year undergraduates, and practitioners using or contributing to SAT, and will provide both an inspiration and a rich resource for their work.

Donald Knuth, 1974 ACM Turing Award Recipient: "SAT is evidently a killer app, because it is key to the solution of so many other problems."

Stephen Cook, 1982 ACM Turing Award Recipient: "The SAT problem is at the core of arguably the most fundamental question in computer science: What makes a problem hard?"