Galway, Ireland – New research from NUI Galway and Boston University has identified a blood biomarker that could help identify people with the earliest signs of dementia, even before the onset of symptoms. The study is published in the Journal of Alzheimer's Disease.

The researchers measured blood levels of P-tau181, a marker of neurodegeneration, in 52 cognitively healthy adults, from the US-based Framingham Heart Study, who later went on to have specialized brain PET scans. The blood samples were taken from people who had no cognitive symptoms and who had normal cognitive testing at the time of blood testing.

The analysis found that elevated levels of P-tau181 in the blood were associated with greater accumulation of ß-amyloid, an abnormal protein in Alzheimer’s disease, on specialized brain scans. These scans were completed on average seven years after the blood test.  Further analysis showed the biomarker P-tau181 outperformed two other biomarkers in predicting signs of ß-amyloid on brain scans.

Emer McGrath, PhD, Associate Professor at the College of Medicine Nursing and Health Sciences at NUI Galway and Consultant Neurologist at Saolta University Health Care Group was lead author of the study. “The results of this study are very promising – P-tau181 has the potential to help us identify individuals at high risk of dementia at a very early stage of the disease, before they develop memory difficulties or changes in behavior,” Professor McGrath said.

The research team said the identification of a biomarker also points to the potential for a population screening program.

Professor McGrath (pictured) explains: “This study was carried out among people living in the community, reflecting those attending GP practices. A blood test measuring P-tau181 levels could potentially be used as a population-level screening tool for predicting risk of dementia in individuals at mid to late-life, or even earlier.

“This research also has important potential implications in the context of clinical trials. Blood levels of P-tau181 could be used to identify suitable participants for further research, including in clinical trials of new therapies for dementia. We could use this biomarker to identify those at a high risk of developing dementia but still at a very early stage in the disease, when there is still an opportunity to prevent the disease from progressing.” 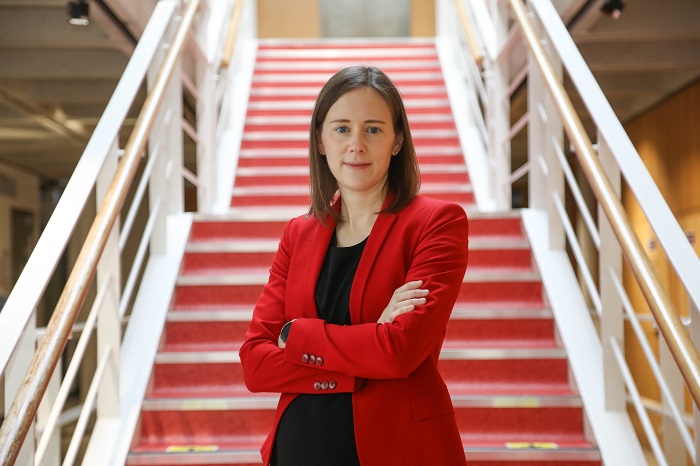 The Framingham Heart Study is a population-based, observational study initiated by the Public Health Service in the United States in 1948 to identify risk factors of cardiovascular disease. Further information is available here.

The authors caution that the sample size for their research was small, it was predominantly Caucasian and further studies in larger samples will be required to confirm the findings. In addition, the appropriate clinical cut-off to differentiate a normal from an abnormal p-tau181 level still needs to be decided.

Contact
Further information can be obtained from the NUI Galway press office (pressoffice@nuigalway.ie). Accredited journalists can get in touch to request a copy of the study.

About NUI Galway
Established in 1845, NUI Galway is a bilingual university comprised of four colleges, 19 schools, five research institutes, more than 20,000 students, 2,200 staff, research collaborations with 3,267 international institutions in 114 countries, 110,000 alumni, while 98% of graduates are in employment or further study within six months. nuigalway.ie

About the Journal of Alzheimer’s Disease
The Journal of Alzheimer’s Disease (JAD) is an international multidisciplinary journal to facilitate progress in understanding the etiology, pathogenesis, epidemiology, genetics, behavior, treatment, and psychology of Alzheimer’s disease. The journal publishes research reports, reviews, short communications, book reviews, and letters-to-the-editor. Groundbreaking research that has appeared in the journal includes novel therapeutic targets, mechanisms of disease, and clinical trial outcomes. JAD has a Journal Impact Factor of 4.472 according to Journal Citation Reports (Clarivate, 2021). The journal is published by IOS Press. j-alz.com