New York, NY, USA  – Mice exposed to World Trade Center dust exhibit a significant impairment in spatial recognition and short- and long-term memory, as well as changes in genes related to immune-inflammatory responses and blood-brain barrier disruption, according to a study conducted by researchers from the Icahn School of Medicine at Mount Sinai and published January 17 in the Journal of Alzheimer’s Disease.

The study suggests a peripheral-brain immune inflammatory “cross-talking” that may increase the likelihood of cognitive decline, identifying key steps that may be therapeutically targetable in future studies of World Trade Center first responders.

“It is imperative that we understand the risk for Alzheimer’s disease in aging first responders and other subjects exposed to Ground Zero so that we can develop preventive initiatives,” said Giulio Maria Pasinetti, MD, PhD, the Saunders Family Professor of Neurology and Program Director for the Mount Sinai Center for Molecular Integrative Neuroresilience at Icahn Mount Sinai and senior author of the paper.

In the years following the attack and cleanup efforts, a cluster of chronic health conditions emerged among first responders who, working at Ground Zero for prolonged time periods, were repeatedly exposed to high levels of this particulate matter. Among the chronic health conditions, a growing body of scientific literature indicates that these first responders may have a greater incidence of mild cognitive impairment, as well as other neurological complications like changes in white matter connectivity and/or decreased hippocampal volume, which may put them at a greater risk of developing Alzheimer’s disease later in life.

“Based on epidemiological and preliminary data, we hypothesized that first responders repeatedly exposed to Ground Zero dusts in the first week post-disaster were placed at greater risk of age-related neurological conditions like Alzheimer’s disease and Alzheimer’s disease-related dementias due to changes in blood-brain barrier permeability, and/or neuro-immune interactions,” said Ruth Iban-Arias, PhD, a postdoctoral fellow in the Department of Neurology at Icahn Mount Sinai. “Our study revealed that acute exposure to World Trade Center particulate matter may accelerate cognitive deterioration and Alzheimer’s disease-type neuropathology in mice genetically modified to develop Alzheimer’s disease. And our transcriptomic analysis strongly suggests that this exposure may trigger generalized immune inflammatory cascades which may underlie the collective pathophysiology being experienced by first responders.” 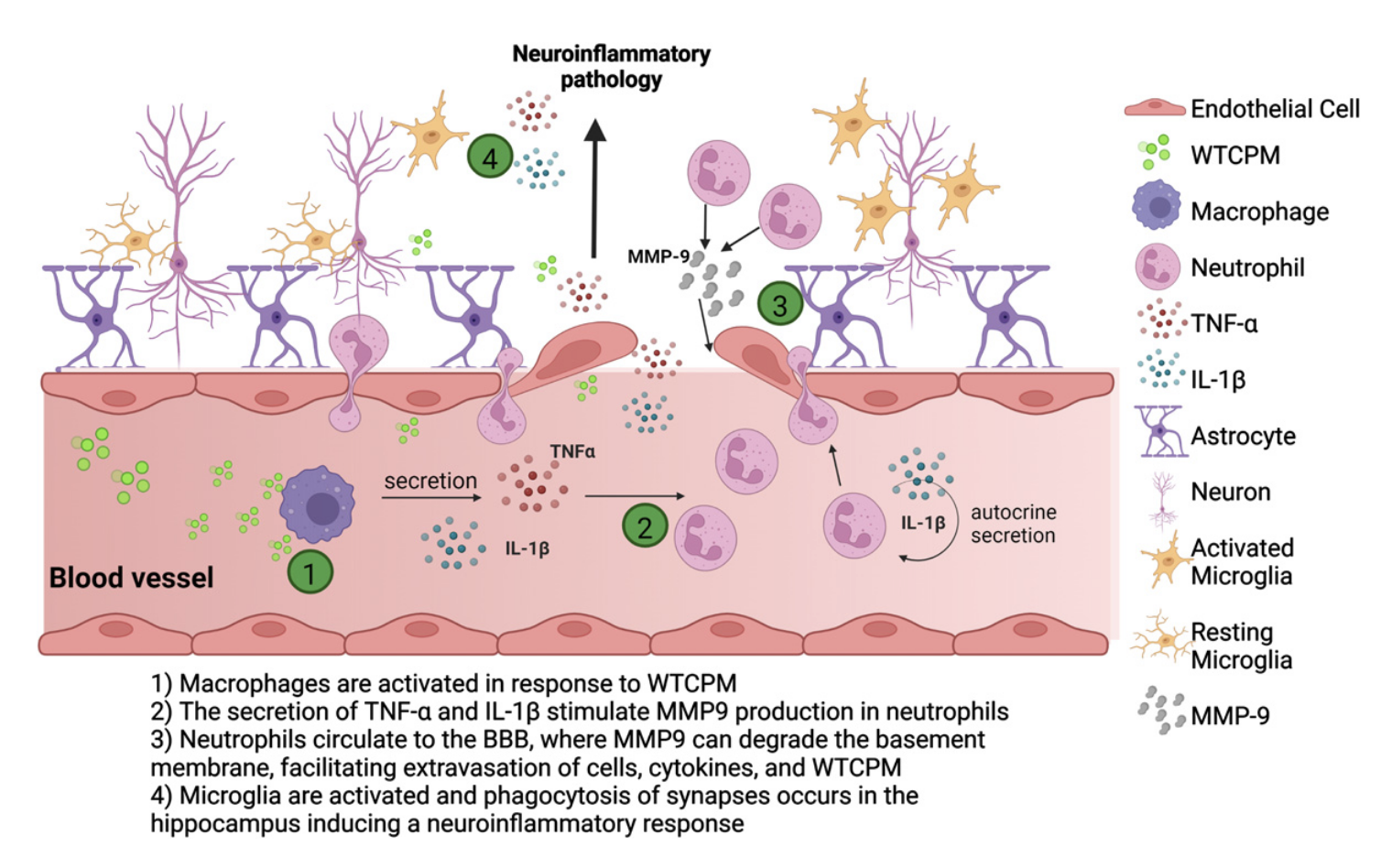 To test their hypothesis, researchers from the Center for Molecular Integrative Neuroresilience at Mount Sinai used mice genetically engineered to develop Alzheimer’s disease (5XFAD) and wild-type mice as controls. Mice in the treatment groups were exposed to repeated intranasal instillation of WTCPM dust—which was collected at Ground Zero within 72 hours after the attacks—for three consecutive days for three weeks, reflecting the air level exposures faced by first responders at Ground Zero. The animals were exposed to WTCPM dust with high and low doses to identify a dose-dependent response.

Y-maze assay and novel object recognition behavioral tests were performed for working memory deficits and learning and recognition memory, respectively. During the Y-maze assay, the mouse was placed at the start of a Y-shaped maze and allowed to roam freely for 10 minutes. Generally, mice have an innate tendency to explore the environment they have not recently visited; spatial working memory impairment in this assay is defined as behavior wherein a mouse re-enters the same arm(s) repeatedly, indicating that it does not remember which arms it has already explored. Seven days later, mice were assessed via a novel recognition test, wherein each mouse was placed in an enclosure with two objects (a salt shaker and a toy block) and given 10 minutes to investigate. Time spent with both objects was recorded. Each mouse was removed and subsequently returned to the enclosure that contained a familiar object from the previous trial and a novel object. Cognitively intact mice display an innate tendency to spend a greater amount of time investigating the novel object rather than the familiar one. Thus, an animal that does not remember which object it has been exposed to previously will spend similar amounts of time exploring both objects.

Both the control and 5XFAD mice exhibited a 10 percent decrease in working memory after exposure to WTCPM dust, with only the high-exposure group displaying significant impairment compared to those not exposed to the dust. The 5XFAD mice exposed to high doses of dust and subjected to the Novel Object Recognition task showed a 16 percent and 30 percent (short- and long-term, respectively) increased preference to explore the familiar object rather than the novel when compared to no-exposure mice, depicting underlying memory alteration, evidently due to dust exposure.

The researchers also performed transcriptomic analysis (study of the complete set of RNA transcripts that are produced in the genome) in the blood and hippocampus of both sets of mice.

Exposure to WTCPM dust evoked a variety of perturbations in immune function, cell signaling, and homeostatic functioning. Interestingly, a trending increase in neutrophils, the granulocytes of the innate immune system, was also noted in the peripheral blood of WTCPM-exposed 5XFAD mice, compared to 5XFAD mice exposed to saline solution containing no dust. Overall, significant activation of pathways with an overarching theme of inflammation including acute phase response signaling were upregulated.

WTCPM dust also exacerbated the neuroinflammatory profile in the mouse brain. The researchers found significant upregulation in the expression of genes involved in blood-brain barrier.

These effects are indicative of a peripherally mounted innate immune response, which might synergistically spread neuroinflammation. Results indicate that the exposure to WTCPM may have exerted peripheral immune responses, ultimately resulting in the disruption of brain endothelial tight junction proteins and leading to a permissive vascular permeability for the migration of peripheral immune modulators to the brain.

“While we should cautiously interpret the outcomes of these preclinical studies and further investigation in the clinical setting is needed, our study provides valuable information relevant to the health of first responders. The data opens a new horizon for investigations to further understand the impact that acute exposure to WTCPM dust has on the accelerated onset of Alzheimer’s and related dementias in first responders who are now reaching older age,” said Dr. Pasinetti.

The Mount Sinai research team is currently conducting preclinical studies that explore the interaction between mice expressing the human form of APOE4/4 (the highest genetic risk factor in late-onset Alzheimer’s disease) and exposure to WTCPM dust to examine the possible accelerated onset of Alzheimer’s disease-type phenotype. These studies will provide the much-needed information for preventive screening and possibly interventions in first responders and other individuals who were exposed to the dust who have genetic susceptibility to Alzheimer’s disease.

About the Mount Sinai Health System
Mount Sinai Health System is one of the largest academic medical systems in the New York metro area, with more than 43,000 employees working across eight hospitals, over 400 outpatient practices, nearly 300 labs, a school of nursing, and a leading school of medicine and graduate education. Mount Sinai advances health for all people, everywhere, by taking on the most complex health care challenges of our time — discovering and applying new scientific learning and knowledge; developing safer, more effective treatments; educating the next generation of medical leaders and innovators; and supporting local communities by delivering high-quality care to all who need it.

Through the integration of its hospitals, labs, and schools, Mount Sinai offers comprehensive health care solutions from birth through geriatrics, leveraging innovative approaches such as artificial intelligence and informatics while keeping patients’ medical and emotional needs at the center of all treatment. The Health System includes approximately 7,300 primary and specialty care physicians; 13 joint-venture outpatient surgery centers throughout the five boroughs of New York City, Westchester, Long Island, and Florida; and more than 30 affiliated community health centers. We are consistently ranked by U.S. News & World Report's Best Hospitals, receiving high "Honor Roll" status, and are highly ranked: No. 1 in Geriatrics and top 20 in Cardiology/Heart Surgery, Diabetes/Endocrinology, Gastroenterology/GI Surgery, Neurology/Neurosurgery, Orthopedics, Pulmonology/Lung Surgery, Rehabilitation, and Urology. New York Eye and Ear Infirmary of Mount Sinai is ranked No. 12 in Ophthalmology. U.S. News & World Report’s “Best Children’s Hospitals” ranks Mount Sinai Kravis Children's Hospital among the country’s best in several pediatric specialties. The Icahn School of Medicine at Mount Sinai is one of three medical schools that have earned distinction by multiple indicators: It is consistently ranked in the top 20 by U.S. News & World Report's "Best Medical Schools," aligned with a U.S. News & World Report "Honor Roll" Hospital, and top 20 in the nation for National Institutes of Health funding and top 5 in the nation for numerous basic and clinical research areas. Newsweek’s “The World’s Best Smart Hospitals” ranks The Mount Sinai Hospital as No. 1 in New York and in the top five globally, and Mount Sinai Morningside in the top 20 globally.