Houston, TX, USA – People who received at least one influenza vaccine were 40% less likely than their non-vaccinated peers to develop Alzheimer’s disease over the course of four years, according to a new study from UTHealth Houston. Research led by first author Avram S. Bukhbinder, MD, a recent alumnus of McGovern Medical School at UTHealth Houston, and senior author Paul E. Schulz, MD, the Rick McCord Professor in Neurology at McGovern Medical School, compared the risk of Alzheimer’s disease incidence between patients with and without prior flu vaccination in a large nationwide sample of US adults aged 65 and older. The paper detailing the findings is available online in advance of the publication of the Aug. 2 issue of the Journal of Alzheimer’s Disease.

“We found that flu vaccination in older adults reduces the risk of developing Alzheimer’s disease for several years. The strength of this protective effect increased with the number of years that a person received an annual flu vaccine – in other words, the rate of developing Alzheimer’s was lowest among those who consistently received the flu vaccine every year,” said Dr. Bukhbinder, who is still part of Dr. Schulz’s research team while in his first year of residency with the Division of Child Neurology at Massachusetts General Hospital. “Future research should assess whether flu vaccination is also associated with the rate of symptom progression in patients who already have Alzheimer’s dementia.”

The study – which comes two years after UTHealth Houston researchers found a possible link between the flu vaccine and reduced risk of Alzheimer’s disease – analyzed a much larger sample than previous research, including 935,887 flu-vaccinated patients and 935,887 non-vaccinated patients.

These results underscore the strong protective effect of the flu vaccine against Alzheimer’s disease, according to Dr. Bukhbinder and Dr. Schulz. However, the underlying mechanisms behind this process require further study.

Alzheimer’s disease affects more than 6 million people living in the US, with the number of affected individuals growing due to the nation’s aging population. Past studies have found a decreased risk of dementia associated with prior exposure to various adulthood vaccinations, including those for tetanus, polio, and herpes, in addition to the flu vaccine and others.

Additionally, as more time passes since the introduction of the COVID-19 vaccine and longer follow-up data becomes available, Dr. Bukhbinder said it will be worth investigating whether a similar association exists between COVID-19 vaccination and the risk of Alzheimer’s disease. 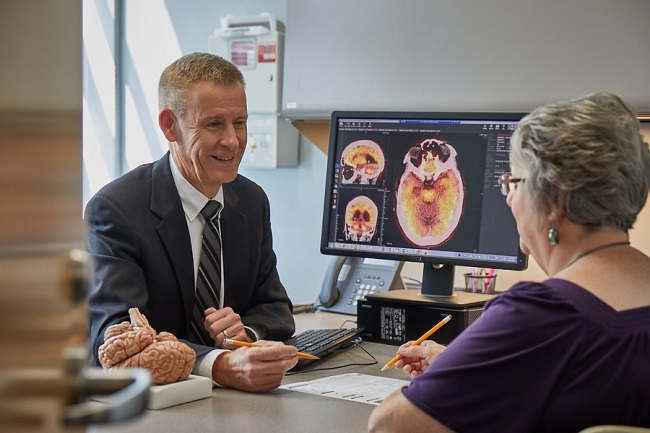 Photo cption: A team of researchers including Paul E. Schulz, MD, found that flu vaccination was associated with a reduced risk for Alzheimer's disease over a four-year period (photo credit: UTHealth Houston)

Contact
Further information can be obtained from the media office at UTHealth Houston (+1 713 500 3030).

About the Journal of Alzheimer's Disease
Now in its 24th year of publication, the Journal of Alzheimer’s Disease (JAD) is an international multidisciplinary journal to facilitate progress in understanding the etiology, pathogenesis, epidemiology, genetics, behavior, treatment, and psychology of Alzheimer’s disease. The journal publishes research reports, reviews, short communications, book reviews, and letters-to-the-editor. Groundbreaking research that has appeared in the journal includes novel therapeutic targets, mechanisms of disease, and clinical trial outcomes. JAD has a Journal Impact Factor of 4.160 according to Journal Citation Reports (Clarivate, 2022). j-alz.com