Investigators found that most swallowing difficulties (dysphagia) resolve within two months after spine surgery, but the perception of a swallowing difficulty may persist for longer, according to a study published in <em>Advances in Communication and Swallowing</em>

Amsterdam, NL – Difficulty swallowing is one of the most common complications of anterior cervical spine surgery (ACSS). Investigators who evaluated possible risk and contributing factors report in Advances in Communication and Swallowing that although most difficulties resolve within two months, the perception of swallowing difficulty can persist for longer, but this does not always correlate with test results.

“We see many patients suffering with this problem after ACSS,” explained lead investigator Ashli K. O’Rourke, MD, Medical University of South Carolina, Charleston, SC, USA. “The perception of swallowing difficulty can persist for more than two months following ACSS but often does not correlate with current gold standard testing. This can be a frustrating situation for patients who are given no specific explanation for their complaints.”

Investigators examined post-operative swallowing changes in patients with dysphagia following ACSS compared with healthy age- and gender-matched individuals. They undertook this study to evaluate possible risk or contributing factors so that they could better identify patients who may be at risk and counsel patients more effectively before surgery. They also wanted to determine if there was a timepoint after surgery when dysphagia was likely to resolve due to improvement in factors such as prevertebral soft tissue swelling, sensation changes, or temporary nerve irritation after surgery.

Eligible patients were identified using electronic medical records to cross-reference patients who underwent both ACSS and a videofluoroscopic swallow study (VFSS), also referred to as the modified barium swallow study, between January 2010 and October 2018. Medical records were then reviewed to ensure patients had new onset of subjective complaints of dysphagia after surgery (e.g., food sticking, coughing during meals) prompting a referral for VFSS. Patients with pre-existing documented dysphagic complaints, altered diets, or gastric tube placement were excluded. 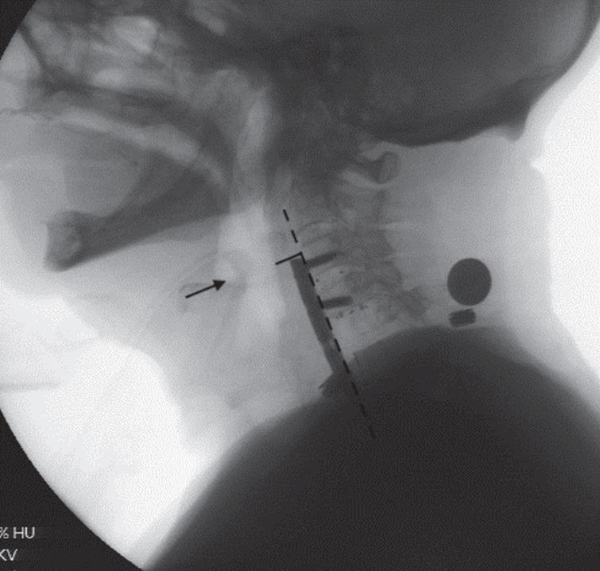 Investigators found that patients in the early phase of recovery had significantly more swallowing impairment and a higher incidence of material entering the lungs (aspiration) compared to healthy controls and patients in the late phase of recovery. Their findings agreed with previous studies that also showed improvement in swallowing after two months post-ACSS, with most patients able to return to normal diets shortly thereafter. The thickness of the throat/neck tissues was significantly greater in the ACSS patients at all time points following their surgery compared to healthy individuals.  However, their results revealed that chronic increased neck tissue thickness was not associated with impairments on x-ray testing to explain the patients' dysphagia symptoms.

“Healthy swallowing is integral to life by maintaining nutrition. However, eating is also a very social activity, and so patients with dysphagia can suffer from isolation and poor quality of life in so many aspects. Any translational research that can assist in improving dysphagia outcomes for these patients can help improve their quality of life,” commented Dr. O’Rourke.

ABOUT ADVANCES IN COMMUNICATION AND SWALLOWING
Advances in Communication and Swallowing (ACS) is the official journal of the Irish Association of Speech & Language Therapists (IASLT). It is a peer-reviewed journal that welcomes submissions from clinicians and researchers in areas including, speech, language, voice, fluency, communication, and swallowing. It is multidisciplinary in nature with submissions considered from professional and scientific disciplines allied to speech and language pathology, such as linguistics, psychology, education, audiology, and medicine. The journal provides a platform for the sharing and exchange of information of a contemporary or historical nature, with communication and swallowing as the broad focus.

IOS Press assumed publication of ACS in 2021, which was formerly entitled Journal of Clinical Speech & Language Studies. The new title reflects the significant evolution of the field over the last decade. iospress.com/advances-in-communication-and-swallowing