Not Only Syria? The Phenomenon of Foreign Fighters in a Comparative Perspective

134 of NATO Science for Peace and Security Series - E: Human and Societal Dynamics 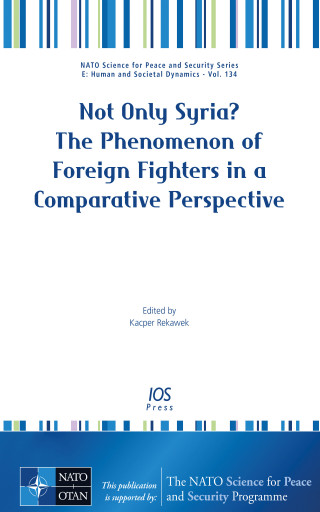 The term ‘foreign fighters’ describes nationals of one state who – for whatever variety of reasons and motives – travel abroad to take part in a conflict in another state without the promise of financial reward. The majority of attention has so far been focused on the nationals of Western European states who have gone to fight for the so-called Islamic State in Syria. There exist, however, other examples of contemporary European foreign fighters whose travails, motivations and returns have been largely unnoticed and underappreciated. This books attempts to balance this state of affairs by bringing to the fore some lesser known cases of non-terrorist but foreign fighters related to the conflict in Ukraine, and situating them against the backdrop of the larger mobilization for the war in Syria.

This book presents edited versions of the 12 papers presented at the NATO Advanced Research Workshop (ARW) ‘Not Only Syria? Foreign Fighters: A Threat to NATO Allies and Their Neighbours’. The workshop was held in Chisinau, Moldova, in May 2016, and brought together researchers and experts in the field to discuss the differences, similarities and parallels between different groups of foreign fighters engaged in the conflicts in Syria and the Ukraine. The papers include contributions from the Netherlands, Belgium, Denmark and Poland among others, and examine cases of foreign fighters from these and other countries.
The book will provide an interesting context to researchers who have, up to now, looked only at a single set of such fighters, and will lead to tangible recommendations on how to develop policies to address the threat posed by returnees from any conflict.