151 of NATO Science for Peace and Security Series - E: Human and Societal Dynamics 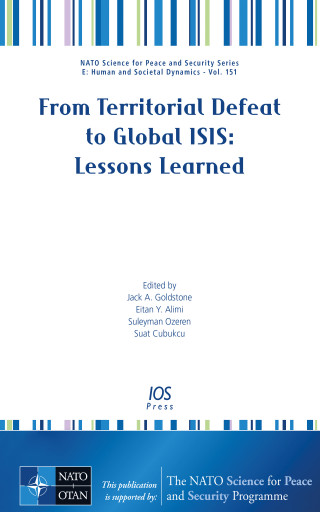 When Islamic State (ISIS) forces were driven out of the territories they had acquired in Syria and Iraq, there remained a concern that the threat posed by ISIS was far from over. It was clear that significant long-term strategies would be needed to establish and maintain security and stability if the potential for further radical Islamist threats in the Middle East and among NATO countries was to be eradicated.
This book presents papers from the NATO Advanced Research Workshop (ARW) entitled The Post ISIS-Era: Regional and Global Implications, held in Washington DC, USA, from 6-8 September 2019. The ARW brought together participants from NATO member nations and Partner countries, and from diverse backgrounds, including academia, security, law enforcement, intelligence, military, foreign affairs, media, think tanks, international organizations and embassies. Topics covered included: the future of ISIS after the loss of its territories; maintaining security and stability; analysis of ISIS recruitment and propaganda activities; the returnee problem and the plight of refugees; the processes of radicalization; response to the changing nature of violent extremism; policy recommendations to mitigate the consequences of new threats; and dealing with the exploitation of public fear of terrorism.
The book also discusses how the lessons learned can be implemented, and offers specific policy recommendations for the future. It will be of interest to all those involved in combating the international terror threat.