193 of Proceedings of the International School of Physics "Enrico Fermi" 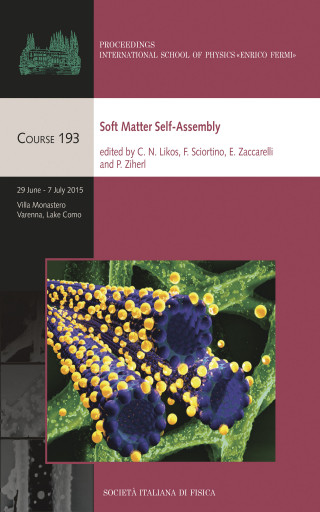 Self-assembly is one of the key concepts in contemporary soft condensed matter. It is an umbrella term which encompasses the various modes of spontaneous organization of micrometer-and submicrometer-sized particles into ordered structures of various degrees of complexity, yet it often relies on remarkably simple interactions and mechanisms. Self-assembly is one of the key principles used by nature to construct living matter, where it frequently takes place in a hierarchical fashion.

This book contains the lectures from the Enrico Fermi summer school: Soft Matter Self-assembly, held in Varenna, Italy, in June and July 2015. The primary aim of the school was to cover the most exciting modern aspects of self-assembly in soft condensed matter physics, and to enable Ph.D. students and postdocs to engage with some of the most exciting and current topics in the physics of colloids through a series of mini-courses and seminars hosted by leading figures in the field.
Subjects covered include: colloids with directional bonding; pathways of self-organization; self-assembly hydrodynamics; polymer structure and dynamics; liquid-crystal colloid dispersions; and self-organizing nanosystems.

The proceedings also include two reprints from Reviews of Modern Physics, and will be of interest to both students and experts in the field.