146 of Proceedings of the International School of Physics "Enrico Fermi" 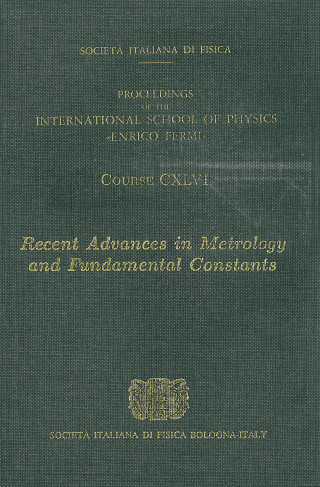 The exchange between physics and metrology is always fascinating and exciting. Many are the open problems in physics that call for extremely precise standards, many are the advances in metrology made possible by a deep and assiduous study of the underlying physics. One has just to think of the enormous sophistication required in the measurements of some absolute quan-tities such as the Avogadro, the gas, or the gravitational constants. It is also worth noticing that not only the units of a metrological system are interrelated through the fundamental constants, but also the latter find their full significance when they are determined through the most exacting metrological experiments.
Over the past decade many improvements took place and these are discussed in this book; from one side the old caesium SI second definition has found a new realisation, with the “fountain” approach, replacing the classical thermal atomic beam. The use of “cold” atom techniques, in which bunches of inert atoms are collected, slowed down, and cooled, has opened a number of new and unexpected avenues for metrology and fundamental constants; one of these possibilities being the atom interferometry.
Another important “quantum jump” was the demonstration of the possibility of performing a direct frequency division in the visible, using ultra short femtosecond pulses. In addition, the possibility of “counting” electrons or photons gave a fundamental support to the development of single-electron capacitance standards and to new scenarios in the absolute calibration of photo-detectors