Analyzing Different Dimensions and New Threats in Defence against Terrorism

104 of NATO Science for Peace and Security Series - E: Human and Societal Dynamics 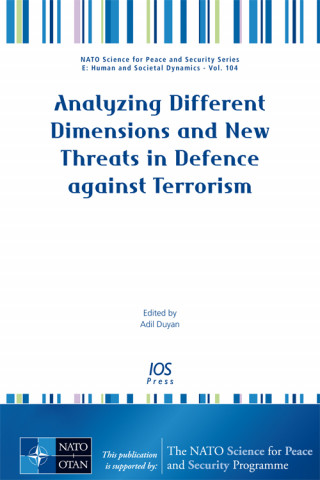 The issue of new threats in terrorism is of constant concern for those engaged in counterterrorism and antiterrorism. Defensive tactics must be constantly updated and improved to keep pace with the never-ending changes and developments in terrorist methods and capabilities. This book presents the proceedings of the NATO Centre of Excellence – Defence against Terrorism (COE-DAT) Advanced Training Course (ATC) entitled "Analysing Different Dimensions and New Threats in Defence against Terror" held in Kiev, Ukraine, in May 2011.

The purpose of this ATC, featuring 12 expert speakers from five countries, was to update participants drawn mainly from the police and military forces of the Ukraine on the latest developments in the field. Subjects covered include understanding terrorism; strategy, policy, legislation, prevention and enforcement; winning back religion by countering the misuse of scripture; terrorism and international law; the role of intelligence in defence against terrorism; captured terrorists as intelligence sources; crisis management and terrorism; terrorism and human rights; and energy security and terrorism. Providing an update in the fight against terrorism and furthering the science of counterterrorism, this book will be of interest to all whose work involves aspects of the terrorist threat.