295 of Frontiers in Artificial Intelligence and Applications 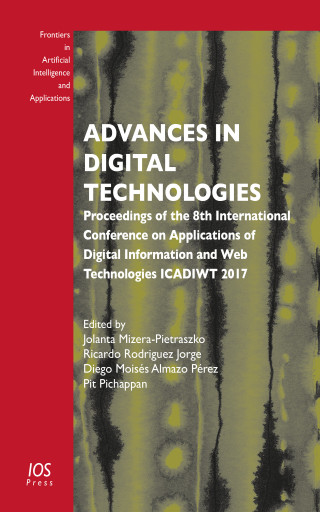 Web technology is ubiquitous in modern life, enabling various forms of communication in real time between the users and computers, as well as between network devices, by means of artificial (markup) languages and cascading style sheets (CSS). Multimedia packages implemented in the WWW can also further expand the user groups to include, for example, the amblyopic or the hearing-impaired. According to Microsoft, Web technology also encompasses Web servers and programming languages for building Web applications. But such a breathtaking development that meets dynamically changing new emerging networking standards demands a large-scale infrastructure that will enable us to access digital information in its every form, whatever its purpose.

This book presents 20 papers and 3 keynote speeches from the 8th International Conference on Applications of Digital Information and Web Technologies (ICADIWT 2017), held at the Universidad Autόnoma de Ciudad Juárez, Juárez City, Chihuahua, Mexico, in March 2017. Over the years, the ICADIWT conference has created its own research community of participants from many countries, who attend the event each year to demonstrate and discuss their research findings. The community is growing every year.

The scope of the ICADIWT 2017 conference covers a wide range of research areas, and the papers in the book are divided into 7 subject areas: pattern recognition; distributed computing; mobile technologies; digital technologies for aerospace; medical systems applications; system engineering; and control systems.